It was morning and the dog stared out the window, as dogs do, so I joined him. It’s hard to say what interests him. He’s a dog and likes dog things. We live in an older neighborhood with a pond and large natural area  in front of the house. Sometimes one or both of his nemeses, Big!White!Dog! or black Pointy Dog show up and annoy him. Besides other dogs, the area is home to wildlife–coyotes, waterfowl, foxes, rabbits, and so on. A juvenile bald eagle seems to have taken up residence, which is kind of cool. It’s private property but lots of people stroll through whether they live here or not.

A man bouncing along the path caught our attention. Short arms swinging, he was pudgy and round, fairly short, gray hair, Irish walking cap. He wore a white short-sleeved shirt and sky-blue Bermuda shorts pulled up too high, and socks. Think Midwestern tourist in San Francisco. Think the Monopoly Man on the beach but without a mustache. If you saw the little man in a shopping mall or stadium, you wouldn’t give him a second thought. He was so nondescript that I’m having a hard time describing him.

I didn’t give him a second thought either, until he rounded the walk and I noticed he had a pistol strapped to his belt. It wasn’t a big 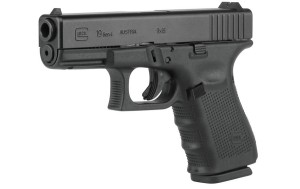 pistol, like a Navy Colt .45 or a 9 mm. Glock or something you’d see a police officer packing. His gun was compact and angled in its holster, maybe a .22 or .25. or .32 caliber. I waited, hoping to check him out further, but instead of turning and walking along the front of our house as most strollers do, he turned the other way and disappeared.

A few months ago, my wife and I rounded the aisle in a grocery store and ran into a guy with a large automatic pistol cinched to his waist. He was a big guy in a tank top and jeans, backwards baseball cap, normal guy, not a security guard or cop or anything. It was unsettling, so we turned and left.

You just think, Why? Why do they have to sport a pistol in public?

Everyone knows the gun arguments on both sides, so I won’t get into them here. What difference does it make? Everyone’s mind is made up and nothing will change anyway.

But still. What goes through people’s minds when they get dressed? They think, “Well, I’ll wear this shirt and these pants” or whatever for whatever reason–it’s hot, they’re going out someplace, time to go to work, they’re heading for the gym, they’re visiting their in-laws–all the places people go to do whatever it is they’re going to do, and dress accordingly.

Again, why? Okay, maybe they’re undercover-law enforcement, but that’s not likely. Are they afraid of something? Did the little man on the path think he might have to shoot a coyote? Was he looking for terrorists behind the cottonwood trees? Did the guy in the grocery store think he was going to take down some bad actor? What would they say if you asked them why they were packing heat? Do they imagine scenarios where they can be heroes helping people, such as stopping an in-progress burglary, preventing a schoolyard shooter, saving a woman being raped?

When we lived in Portland a few years ago, a man with a gun intervened in a car theft by trying to shoot out the tires of the fleeing car. One of the bullets bounced off the tire and hit a pedestrian. Who knows where the other bullets went?

Recently, the Denver Post ran an item about a dispute between two men over a parking place resulting in one of them being shot and killed. Stories run several times a week about road rage incidents ending up in shots fired, injuries or fatalities resulting. In this story, a man killed a 13-year-old boy and shot the boy’s mother and little brother, along with a bystander, over a lane change.

A few months ago, I wrote a post about my former dentist, whom I adored for her skill and humor. Her husband killed her. I’m still not over that one.

The thing about guns people seldom talk about is that they make their holders do something they otherwise wouldn’t have done. You get in an argument with someone. It turns into shouting. Then, maybe, name-calling, even shoving. If there’s no gun involved, it stops there. But if one or the other yanks out a gun, it’s a different situation.

When I saw the little man with the gun and they guy in the grocery store with his gun along with other times of seeing people packing their firearms, gun rights never occurred to me. All that comes to mind is, “What’s that person going to do with that gun?”

Because you don’t know.