Day 283 or so of The Apocalypse, and T-Who-Must-Not-Be-Named is still the American president. Every day since he began his evil journey from the bowels of Trumpistan, people, pundits, politicians, you name it, have proclaimed, “He can’t last–he’s finished this time.”

Refuting him with facts doesn’t seem to work. In fact, as George Lakoff has pointed out,  logical refutation is not only useless, it instead reinforces the outrages Trump utters. Snark and satire amuse, but haven’t slowed him a whit. Those speaking principled opposition create their own echo chamber and seem to feed the beast more than wound it. It’s very frustrating.

It’s time to try something different, and I’m proposing the Decency Project, whereby we offer up ideas and notions that replace Trumpisms rather than simply oppose them. Even the name itself–Decency–suggests replacement, since nothing decent exists in Trumpistan. The idea comes from something one of my neighborhood groups, the Family Co-op, did recently with its Kindness Project, whereby members painted rocks with kind or inspirational sayings and hid them like Easter eggs throughout the neighborhood.

The Decency Project will post pictures or videos or whatever of decent events, people,  or actions that happen in the U.S. every day that Trump and his ilk can only look at with envy. Without further explication, I post the following, of fired U.S. Attorney Preet Bharara swearing in 30 immigrants as new American citizens and leading them in the Pledge of Allegiance. It’s an ironic and sublime moment Trump will never, ever be a part of.

If you like this project and feel compelled to join me, please do so! 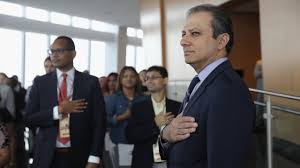 1 thought on “The Decency Project”