This video was released a few months ago, but a replay is definitely in order.

It has nothing do do with Dr. Oz, but hey. The Emperor of Trumpistan isn’t denying Oz’s appointment.

It’s Day 34 of the Apocalypse wrought by the Trumpistan invasion, with Dour Don

dissing the CIA’s report of Russia tilting the election in his favor. These kinds of things run counter to the Make America Great Again narrative, after all, which is now hitting full stride:

That was then. This is now. “The business of the American people is business,” said Cal Coolidge in 1924 when things was roarin’ and failed banks and market collapses hadn’t occurred in recent memory (or for 17 years–one of those), and a world war to end all wars was a long, long way from Tipperary.  Doubletalk Don will return to those halcyon days when men were men and do his all to make America grope again.

Channeling Silent Cal once more, the Merry Trumpster floated the name of ExxonMobil’s CEO, Rex Tillerson, to become Secretary Of State. Rex’s diplomatic bonafides are that he’s pals with Bad Vlad the Hacker and makes great deals, at least for Exxon. Or, at least they were great deals until the U.S. and Europe levied sanctions on Russia instead of rewards for altering the map of Europe through military force. Exxonasaurus Rex didn’t like that. After all, there’s no oil in Crimea or anywhere else in Ukraine, so who cares about them?

It’s day 30 of the Apocalypse, and the good news is that civilians still control the military so far. Or the military controls the civilians. One of those. Both are true, unless they’re not, in the Trumpladyte chaos, aka The Transition, aka The Revolution.

Or, with today’s naming of yet another general to the cabinet, the Junta.

Like that new Air Force One plane Boeing is designing for the U.S. President. It will cost $4 billion, tweets the Sun King–egads, waste and fraud–unless it will cost the $170 million Boeing says is the contract price.  It’s one of those.

After all, doesn’t a word mean what you choose it to mean–neither more nor less? And isn’t the question whether or not you can make words mean so many different things? Or, is the question, which is to be master? Or, did the Sun King have a great fall from the wall Mexico’s gonna pay for, unless it won’t? One of those.

In Trumpistan, truth is fungible. 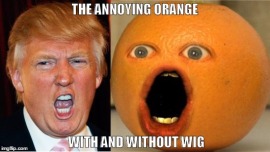 It’s day 24 of the Apocalypse wrought by the invasion from Trumpistan, led by the red-capped orangutan and the salon-coiffed vicar of Indiana intent on making America straight again. The only thing sober about the ongoing reality show known as The Transition is the cocktail-free dinner with toady-in-chief Reince Priebus, and Mitt Romney, who’s quest to have Trumpsky close escrow on Mitten’s integrity continued unabated. The vital question on America’s anxious mind: Who picked up the $600 check?

Meanwhile, The Apprentice decided to channel Andrew Jackson by using the spoils system to  make America great again. Or was it Tammany Hall? One of those.  Steven Mnuchin, a billionaire more in need of an extra vowel than a job, gets Treasury, while billionaire Wilbur Ross (oh wow, look at him now, Zuckerman’s famous pig) snags Commerce.  Next is billionaire donor Betsy Devos, whose only experience with matters education has been ensuring no white child is left behind and gets, well, the Department of Education.

The Angry Carrot once said we could never fix a rigged system by counting on those who rigged it in the first place. Goldman Sachs owned Ted Cruz and Hillary Clinton, he raged. Maybe they only rented Mnuchin.

The rest of the Legion of Doom Trump brought on to drain the Washington D.C. swamp turned out to be swamp foxes all, less hell bent on draining the place than making it a Muslim-free Mar-a-Lago north. It’s a gold-plated geyser erupting tweets to the adoring laity about lying media, illegal votes, soon-to-re-open coal mines and steel mills, and otherwise telling it like it isn’t in 140 characters, the non-coastal swath of The Faithful confusing being rich with being smart.

You can’t cheat an honest person, any con man will tell you, which says more about the throng of rubes from sea to shining sea than it does the jack-o-lantern face smiling down from his Boeing 757.