I already wrote about the first three here.  One definition of failure is intending to write all ten things in one 400-500 word post, and ending up seven things short in a 600-word post. All of which may be the eleventh thing about Istanbul/Turkey: It’s so complex and nuanced that you can never sum it up nicely. More on that later–maybe even another time.

Anyway, item four: The three  most popular tourist sites–Topkapi Palace, Hagia Sophia, the Blue Mosque–are all in walking distance of one another. And I mean like a few blocks.

The Cisterns are across the street from Hagia Sophia. Topkapi Palace is about two blocks away. The Grand Bazaar is two tram stops but you can walk it in 10-15 minutes.

Which brings us to item five: You can visit the terminus train station of the Orient Express. And yep, it’s walking distance from Hagia Sophia. Or three tram stops. It’s across the street (almost) from Eminonu Piers, where the ferries are.  And the Spice Bazaar is across the street from that. And the Galata Bridge crossing the Golden Horn is a few steps away.

Item six: A lot of what we think of as Greek food is really Turkish food. Stuffed grape leaves (dolmas). Shish kebob. Baklava.  Minced meat, cheese, or whatever wrapped in phyllo-type dough and baked. As an aside–in an entire month’s stay, I can count on one hand the number of fat Turks.

Item seven: Nearly all the young people are attractive and hot. The women’s hair erupts like an obsidian waterfall to wrap angular faces with huge, deep eyes, and a sultry expression. Believe me, no one dies sultry like a young Turkish woman. They make Lauren Bacall seem amateur. The men tend to have a day’s beard growth, dark eyes, and are truly handsome in ways that remind you of Paul Newman or Johnny Depp or James Dean. 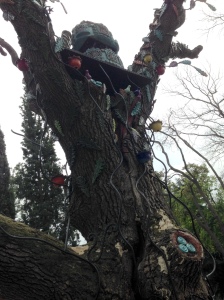 k staff did to this dead tree in a park. In fact, they did this to nearly all the dead trees. How cool is that?

Number nine: Since what is now Istanbul was originally founded in the seventh century BCE, it’s layers of history are unquantifiable. Sit in an outdoor cafe in Sultanahmet, the neighborhood where the above attractions are located, and you could well be seated next to the remains of a brick wall the Byzantines constructed 1,300 years ago.

Number ten: Segueing, the fault lines running through Istanbul aren’t just geological. They’re social, political, historical, and every other kind of -ical you can imagine. Half the city’s in Europe and half is in Asia. It’s in a Muslim country, but most of the events in the New Testament occurred in Turkey.  Byzantines, Ottomans, Italians, and whoever else fought over this castle on the Bosphorus.

In fact, Istanbul may be the location where the Old Testament flood occurred, as discussed in this National Geographic News article, where submarine explorer James Ballard discovered evidence of cities well below the surface of the Black Sea with relatively advanced architecture and construction. Civilizations have been fighting for it for thousands of years–and still are. But nature bats last, right?

And there you have it. Go see it before it’s too late.